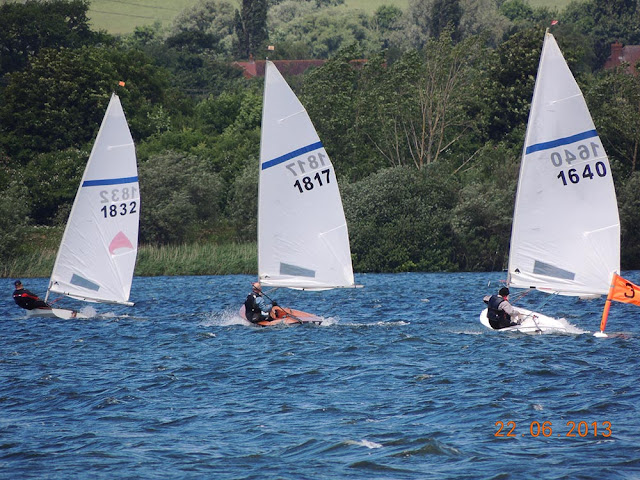 Fully overcast with dark grey cloud, Blowing about force 4 and raining/ drizzling all the way up the M23, M25 and M1 to junction 13.It was not an auspicious 7.00am start on the journey to the Streaker Open meeting at Stewartby. On arrival it did not look a lot more inviting – reference to an earlier weather forecast showed force four and occasionally force five wind from the south west. The actual wind, which increased through the day was a minimum of top end force 4 with gusts well in force 6. I rigged with my ancient Rooster Mylar and together with seven other fool hardy Streakers went afloat in the joint meeting with eleven Solos. I won’t describe the projected first course, except to say that it was convoluted and with some very uncomfortable legs in prospect. Last week I had re-rigged the boat with rear sheeting, not a good move for these conditions from my point of view, but set off on a broad reach from the shore to the top end of the lake and the Committee Boat start there.
As soon as I arrived, and came up to wind, I realised that I had the tiller over the top of the traveller. Having sorted that out, difficult in the strong wind, I subsequently had the traveller wrap around the end of the tiller and ended up crossing the Solo fleet shouting that I had no control and to keep out of my way. Finally I managed to get head to wind and free of the tiller. Shortly afterwards, after the Solos had started, a huge gust tipped me in and I struggled to get back aboard. After the third attempt I scrambled in almost exhausted and decided that these - survival conditions - were not what I liked and so I headed back to shore on a broad reach, spilling wind almost all the way across the lake. The plan had been for two back to back races both in the morning and then two again after lunch. I missed the first race and did not go afloat for the second. After lunch I was offed the use of the Class Wave Sail, of considerably reduced area, and rigged the boat up but the sight of white horses on the water made me think again and I decided not to chance my luck. The rest of my day was spent recovering the boats returning during and after each race, due to various capsizes and gear failures in both the Solo and Streaker fleets. Bett also had a mini disaster when she accidentally deleted all the shots of the first race, including the start, from her 45x Zoom Nikon Camera. A few of the later shots she took were also binned, deliberately this time, as she was unable to hold the camera steady in the strong wind conditions. So to the racing itself, and this will be brief, as I do not have the lap sheets to hand. 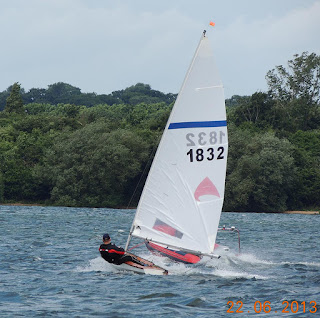 Race one started with five of the eight entries crossing the line – I had already set off for home. Alan Gillard (Sheffield Vikings) was soon in the lead and soon somewhat out in front. A battle commenced for second place between Ian Bradley (Ouse ASC) and Ian Parish (Stewartby) and behind them Veronica Falat (Waveney and Oulton Broad). Chris Smith in his new boat capsized and ended up with a bent mast, although his burgee was completely un damaged. Both he and Tim Browning (Stewartby), like Alan Simmons (Lancing) failed to start the race. Bill Strange (Stewartby) started but pulled out on the last lap and none of these sailed again. 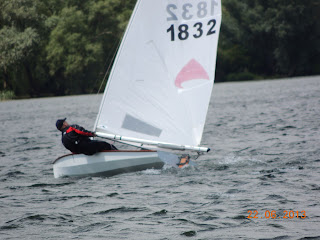 At the front, Alan.G pulled further ahead but as the picture shows even he had problems with the vicious gusts. Ian.B is suspected to have succumbed briefly at some point in the race leaving Ian.P to take 2nd place ahead of him with Veronica coming home in fourth place. As it happened all of the remaining fleet came ashore after the first race but only three went back out for the second. Veronica.F decided not to sail in the second race and view the event from the shore. 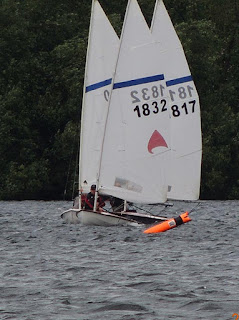 At the start gun for race 2 it was Alan.G first across the line with Ian.B right on his shoulder and Ian.P right on their heels. Again Alan.G pulled ahead, but not by a great margin. The Ian’s were once more joined in battle with each in turn passing one another. A dip by Ian.P rather settled the matter allowing Ian.B to get well ahead. Ian. P did reel Ian.B in a bit but not sufficiently to challenge before the finish gun. After lunch Alan.G and Ian.B launched for what was to be the final race. Ian.P was interested in trying out the smaller sail so he re-rigged and went afloat in race three with it. Veronica.F was rather late in making up her mind whether or not to sail and by the time she went afloat the other three had already started. 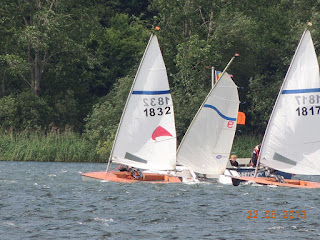 Yet once more Alan.G was out in front with Ian.B following him fairly closely. Ian.P began to drop back from this pair although he did stay ahead of Veronica.F who in turn had made a mess of the course and had to back track at on point. The fourth and final scheduled race was abandoned before the start as neither the Solos nor the Streakers hung about for the start. A wild and windy ride was experienced by all, some of us deciding quit early on to stay ashore in the sincere hopes that next week’s Nationals at Northampton will be a good bit calmer.
Results:-

Alan.S 1700
PS. You may be wondering why Ian.P has an (9.0 RAF) comment against race 3. It appears that the SIs prohibited sailing with other than a boat’s official number – the wave sail is No9 – although Ian thought he had obtained the ROs verbal agreement/acknowledgement before the start and thus he retired.
Posted by Alan.S 1700 at Tuesday, June 25, 2013 No comments:

Up at 05.00am and set off At 06.10 on the 170 mile trip to Beccles on the River Waveney in Suffolk. A good breeze was blowing, from the south, and there were clear blue skies. Some 3.25 hours after starting out, and including a comfort stop, we arrived at Beccles to be informed that the briefing would be at 10.00am (45 minutes later) and race one starting at 10.30am. It was a bit of a rush to get unpacked, rigged, and changed in time but we made it. I must tell you that I got into trouble with my last report – posted on Yachts and Yachting – for failing to note that it was a Pinnell and Bax sponsored Streaker Southern Area Paddle event, which this one was too. My excuse is that I pinched that write up from my own blog which is not sponsored by anyone in the commercial business.
The meeting was held jointly with the Enterprise Class, with the eight Streakers – 4 home boats and four visitors – having the first start. Launching was none too easy with just a single small slipway and the wind by then a good force four making the near bank a lee shore. The locals paddle to the far bank and rigged easily from there – they had to be ferried back to the club after the races by the club safety boats.
The course was fairly straight forward, up river and to windward to the mark, nearest the bridge, which was left to starboard and the down-wind to marks No 2, No 4 (downriver) and then back past No 3, all to port, with the start and finish lines across river from the starting cabin. 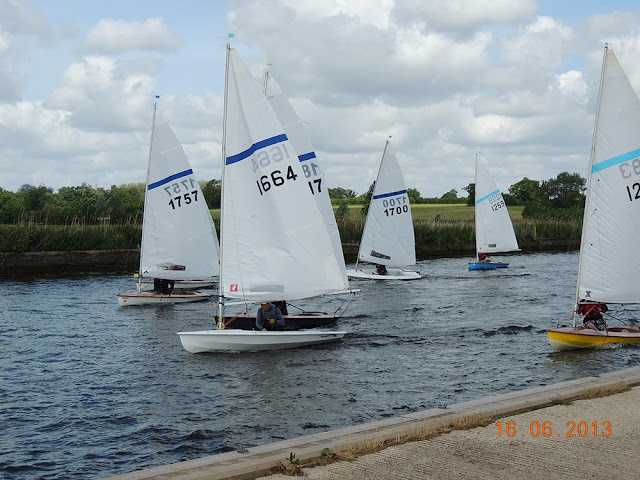 First away in Race 1 was Mark Langston (Beccles ASC) at the leeward end of the line with Ian Bradley (Ouse ASC) just upwind and Gary Hogan (Emberton Park SC) to windward of him. Alan Simmons (Lancing SC) was 5th or 6th behind Rowan Curtis (Beccles ASC) and Charlie Folkard (Beccles ASC). Right at the back were Dave Moriarty (Beccles ASC) and finally Veronica Falat (Waveney and Oulton Broad SC) who had some problems during rigging and was still bankside ahead of the line when the gun went. With a few sharp gust and shifts by the time the leaders got to the windward mark Ian.B was in front with Rowan,C second and Alan. S third – if only he had rounded it in the correct direction  - leading to him losing two places. By the time the fleet began to round the bottom mark  (No 4) Ian.B was unchallenged way out in front. A collision at the mark between Mark.L and Rowan.C allowed Alan.S back into third place and challenging for second but he slowly lost ground finishing in 6th place. Meanwhile Veronica.F recovered from her very late start and climbed through the fleet to finish in second place – a remarkable feat in the circumstances. Mark.L was third, Rowan.C came 4th, Gary .H 5th, Charlie.F 7th and Dave.M 8th. At the briefing it was intended to have the first two races back to back but in the event all came ashore before Race 2 started.
Waiting on the bank was a familiar face, none other than a past Steaker Association Secretary, Vernon Penketh. He lives not far away at Horning, and we had a good old chat and reminiscence – he asks to be remembered by all who knew him in his Secretary days. He reckons he has now given up all his previous sailing club and class officialdom, sold his last boat recently and is now available as crew. 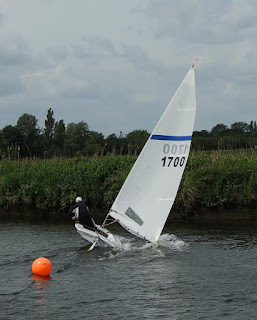 Race two got underway with Veronica.F first away at the leeward end of the line with Mark.L next up but on the windward end of the line this time and Ian.B between the two. Gary.H although he had moored on the far bank did not get back to his boat in time to rig fully before the gun and so was right at the back of the fleet. Veronica.F started to pull away from Mark.L and Ian.B. Alan.S was lying 5th at the windward Mark (No1) behind Rowan.C.

He, Rowan, was caught out by a heavy gust at this mark whilst attempting to bear away and tipped in but he soon recovered and re-passed Alan.S. Alan.S was also passed, down-wind, by Charlie.F. having also had a near capsize at the top mark when a gust forced him to wear round. Veronica.F held her lead from Ian. B until the final lap when he got a favourable shift. Marl.L finished in third place once more with Charlie.F in 4th and Rowan.C in 5th leaving Alan.S at 6th again. After lunch, and more chat with Vernon, Race 3 started over the same course in slightly less breeze.
The gun went with Mark.L first away at the leeward end once more with Rowan.C to windward of him and Alan.S above Rowan. Ian.B was seen to be a bit on the late side going back across the line as the gun went. Similarly Veronica was over the line and had to return but was soon back in the groove. By the time the fleet came to turn the bottom mark (No4) Ian.B was out in front ahead of Mark.L and Alan.S just failed to turn the mark ahead of Veronica.F. On the next upwind leg Veronica climbed up to second place but was unable to catch Ian.B who extended his lead. Mark.L was 3rd home followed by Charlie.F and then Rowan.C. Alan came home in 6th place ahead of Gary.H. and Dave.M. 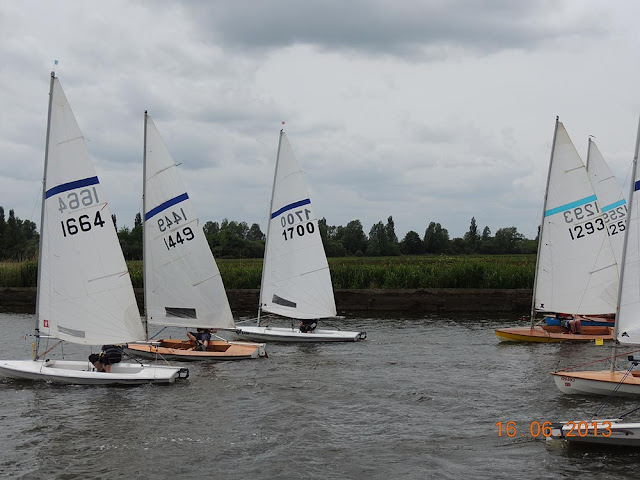 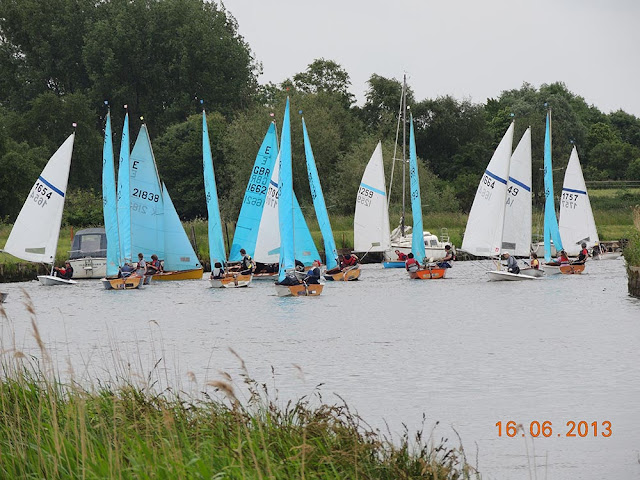 Although these races took place on somewhat restricted water and there were  eleven Enterprises afloat and quite a bit of fleet crossing there was plenty of give and take and no reported clashes and generally lots of give and take between the fleets -  even the Broads Hire cruisers  behaved though fortunately the through traffic was not heavy.
Alan.S 1700
PS. For the official report follow this link to Y & Y - http://www.yachtsandyachting.com/news/170188/Streakers-at-Beccles
Posted by Alan.S 1700 at Tuesday, June 18, 2013 No comments: