Covid 19 Restrictions to Tier 4 on Boxing Day (26.12.2020) meant that the last race in the Freeman Iceberg Series was not held, nor was a prizegiving.
Similarly it is unlikely that any of the Elford Numbum Series will be held, although that is dependant upon if the restrictions are lifted any time soon - destinctly unlikely I would have thought considering the rate at which cases are increasing.
Cosequently I, with Bett's staunch help took my D Zero home on Boxing Day - when else would I be able to!
As a result there will be no further Blogs/reports until at least Sailing week at NSSC in early August 2021 - watch this space.
It has been a miserable year for sailing but hopefully later in the spring things might improve - especially once everyone has had (or been offered) the vacination injections.
Alan Simmons D Zero 224 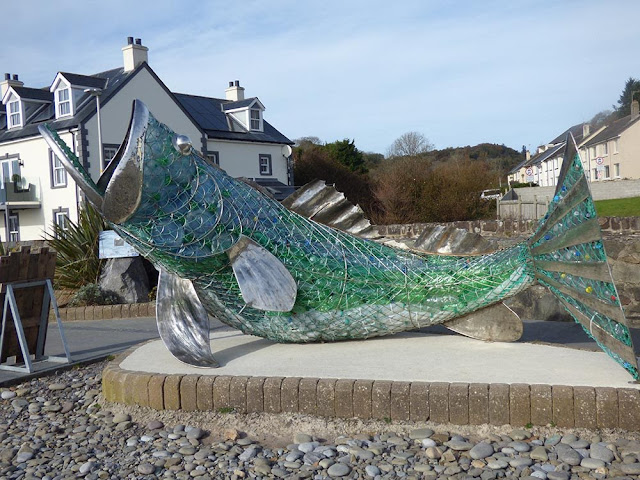 As  had been anticipated it was blowing too hard for Alan’s liking to race on Sunday last thus he went down to take some photos should there be any racing. On arrival at the pond there was some whistling in the rigging (force 5-6 is his guess) to be heard, it was dark and grey and raining but half a dozen boats ventured out for Races 4 and 5.

Zoe McCaig was RO assisted by Sean Beavor and with Andy Beck and Penelope Duncan in the Safety Boat. Zoe set an ‘m’ shaped ‘Dino’ (her words) course – as below – with a windward start close by the clubhouse’. 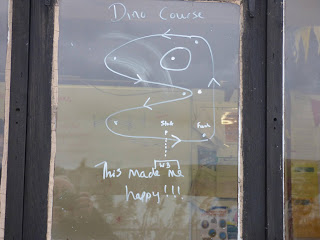 Even before the start there was a bit of ‘activity’ on the water, with both the two Michaels in the RS 200 and the new entrant Stephen Hamilton? (Laser full rig), taking an early dip. Apparently it is a brand new boat, as was his Dry Suit which filled up – Zip not fully closed at a guess. 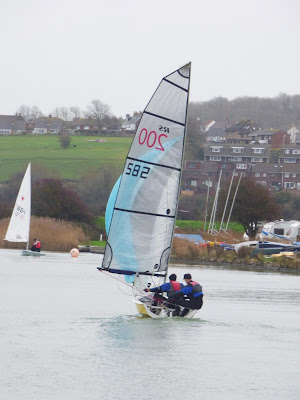 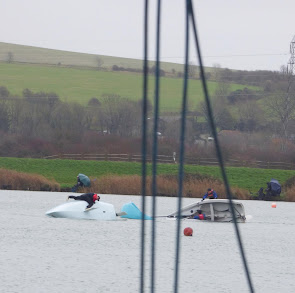 There was even a problem at the start as the ‘hooter’ was malfunctioning – Alan was close to the line and he did not hear it clearly and thus missed the actual start. 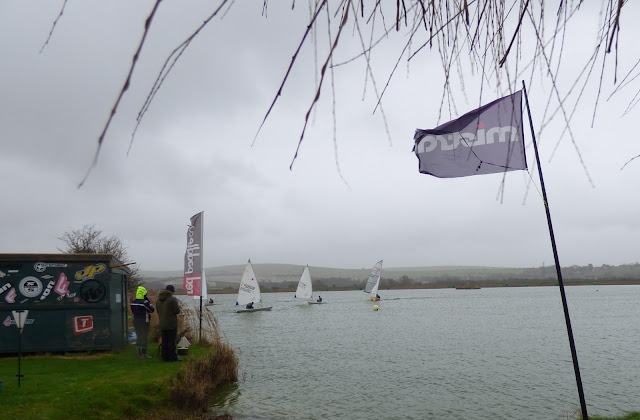 The five starting boats were nowhere near the line at the gun but Thomas Harland-Smith led Lewis Johns around the ‘windward’ mark in the south west corner followed by Michael, Bill Wates (Laser radial) and then Saskia Dethmers (Laser 4.7).Stephen was still half way down the south side of the pond but eventually got to the line area and started last.

After the reach down the south bank, Thomas led Lewis along the eastern shore whilst Saskia led Bill and The RS capsized near the fisherman.

Following the next run, towards the Fisherman’s bay, Saskia had a capsize whilst Lewis sailed the wrong course and ‘retired’. At the line the order was Thomas followed by Bill with Michael close behind (4 seconds) and Saskia fourth. 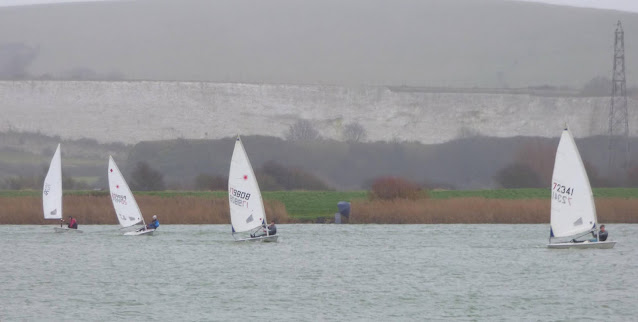 Lap two saw Thomas in the lead as Michael went ahead of Bill and Saskia had nearly caught up to be last but just 4 seconds behind Bill. 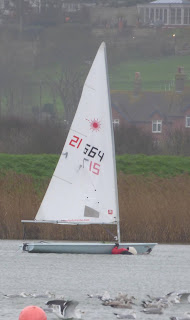 Lap 3 was still led by Thomas with Saskia in second place ahead of Michael and Bill – probably more capsizes, it was difficult to keep up with them, capsizes that is. 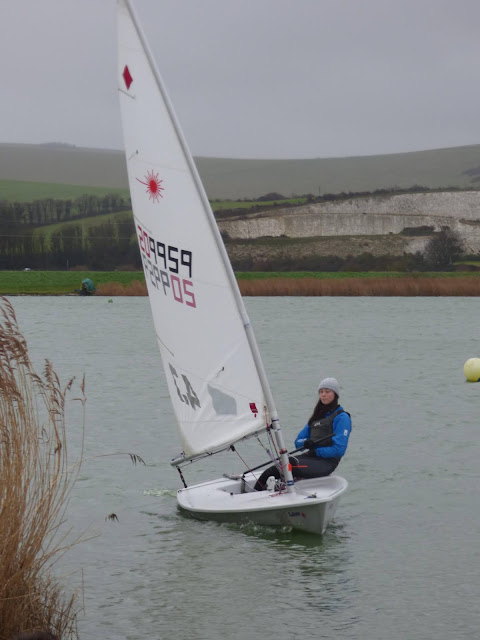 Lap 4 and Thomas was way out ahead but with Saskia second and Bill passing Michael.

Lap 5 and Zoe sent Thomas around again, alone, having finished the others at the end of lap 4.

With the results for this race calculated the winner was Thomas with Saskia second, Bill third and Michael fourth. 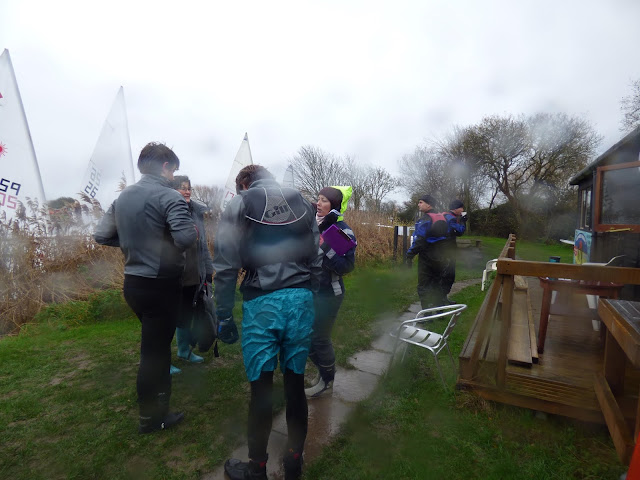 After a short break ashore, for coffee, the ‘drowned rats’ including the RO and helpers set up for the second race, over the same course. This time a whistle was used and the signals were heard loud and clear. 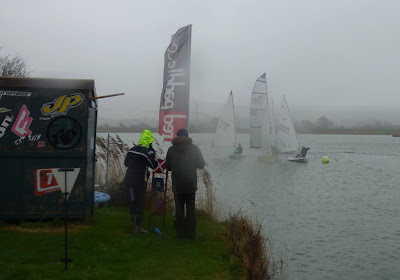 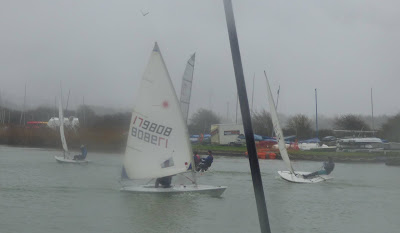 First to cross the line at the gun, was Saskia with Michael just to leeward and slightly behind. Next came Thomas followed by Lewis. Bill was still somewhere in the reeds on the west bank. He did eventually start but a long way back. 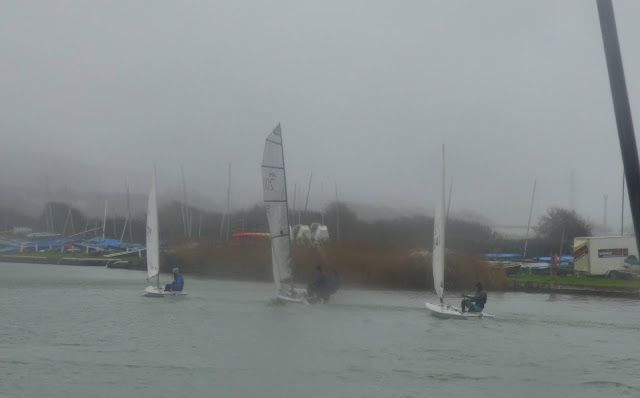 At the end of the first lap Thomas was ahead of Saskia by 14 seconds with Michael next then Lewis – having taken a short swim – with Bill last to cross the line. 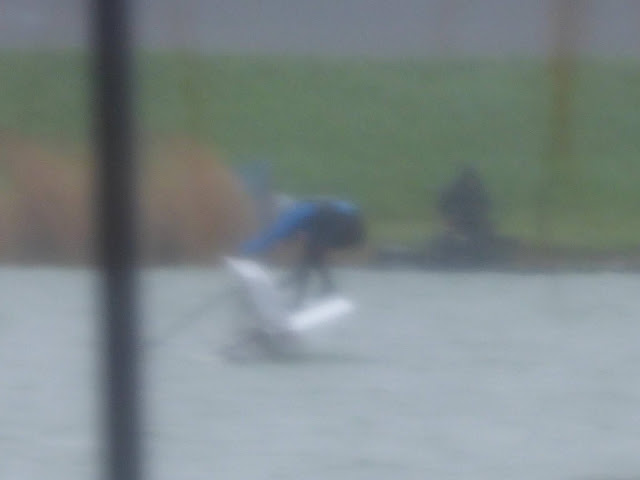 Lap 2 and it was Thomas who took the plunge allowing Michael into the lead and Lewis passing Saskia as she dipped ln along the way – approaching the mark off the Fisherman's bay at the end of the downwind leg seems to have been a favourite spot to swim in. 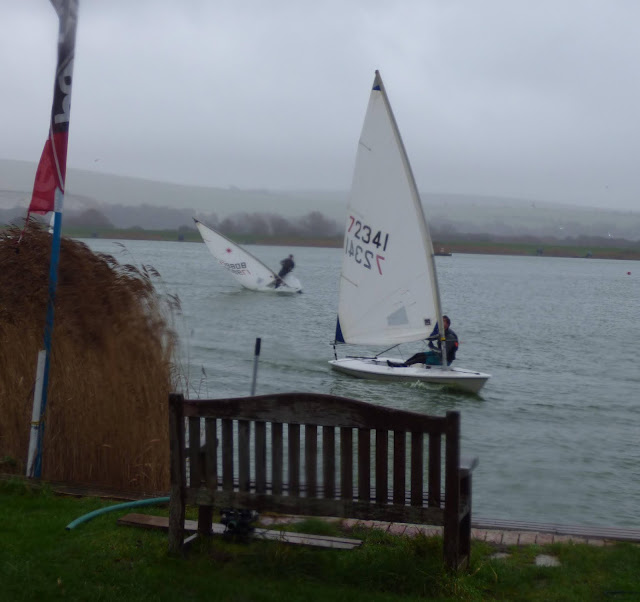 Lap 3 was won by Lewis with Michael second and Thomas third – no guesses as to what happened to him. Bill was still last to cross the line. 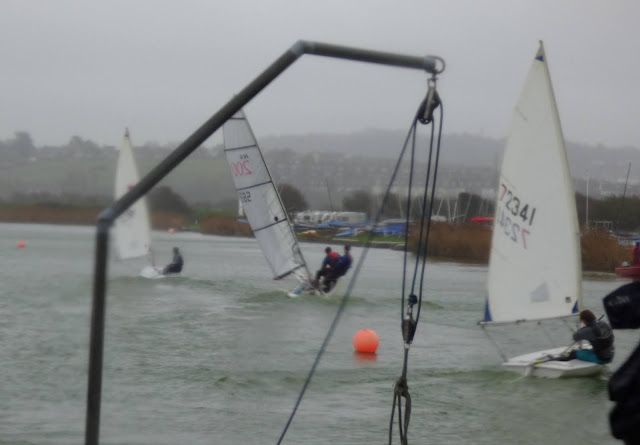 Lap 4 and Thomas was back in front of the fleet with Michael next, then Lewis followed by Saskia  and Bill at the back still. 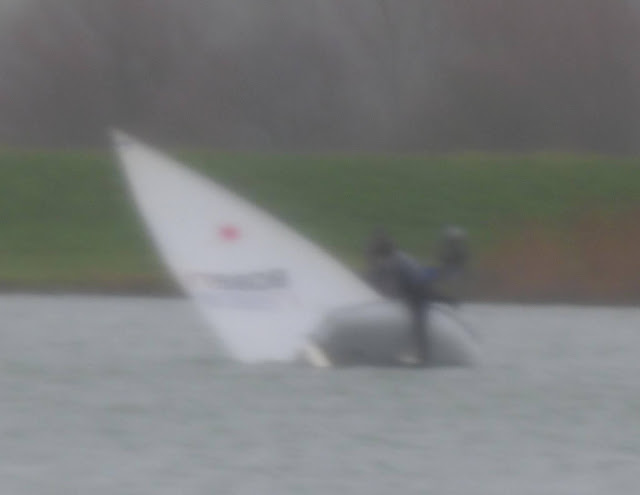 Lap 5 was led by Thomas with Michael behind and Saskia ahead of a rather damp Lewis with Bill last man ‘standing’. 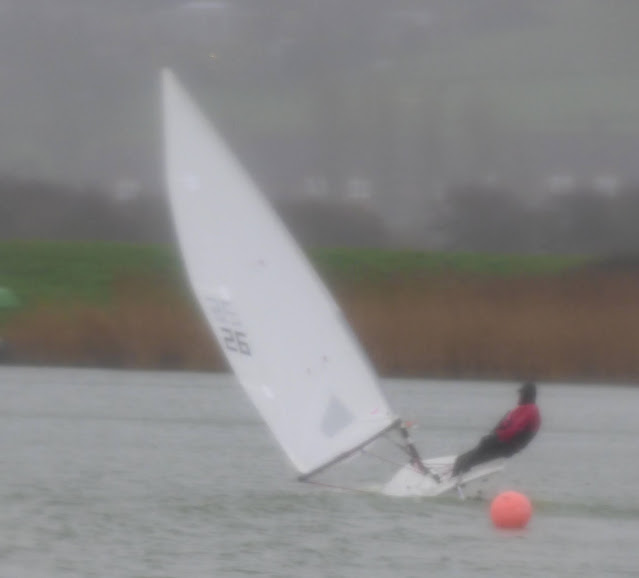 Lap 6 the final lap with Thomas leading the pack, Michael next and then Saskia a mere 5 seconds behind. Bill had already finished having been given the gun at the end of the previous lap. 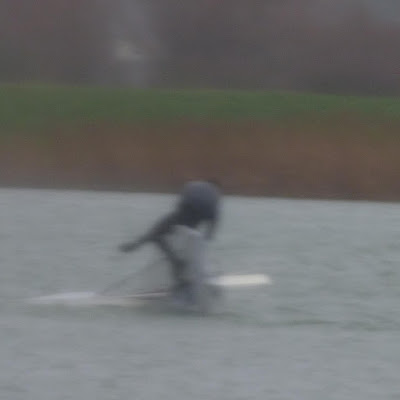 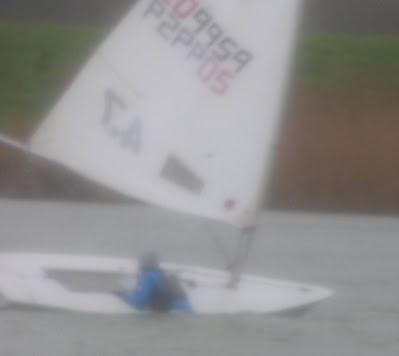 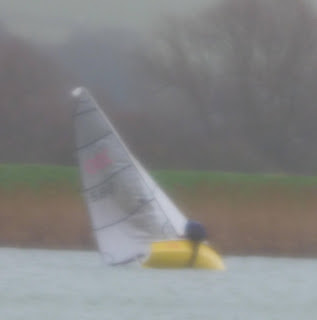 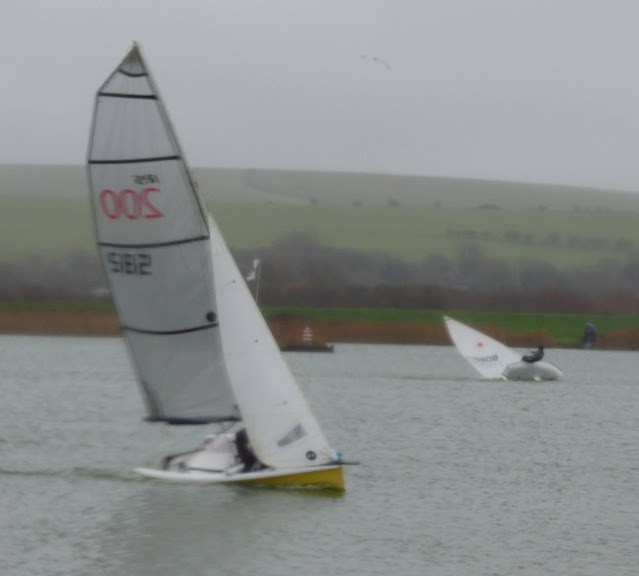 The worked out results confirmed a win for Saskia with Thomas second, Lewis third, Michael fourth and Bill fifth.

These had been two gruelling and somewhat wet races, exciting sailing – and swimming not quite so much. All who took part are to be commended for sticking it out in those conditions. Yours truly, whilst wisely not going afloat, had to contend with almost continuous light rain and very breezy conditions which meant that many of the photos he took were out of focus or be-speckaled with rain drops

The current forecast for next Sunday, 20th December, is looking a bit less frantic – but who knows how it will eventually turn out.